KNOXVILLE, Tenn. – One of the things that consistently keeps TLD Logistics among the best companies to work for in its city and continually scores it high marks as one of the best trucking fleets to drive for is its unwavering commitment to involvement in its community.

Being a good corporate neighbor is one of the core principles within the company’s culture and its actions prove it’s more than lip service or direction from corporate leadership.

Over the past month, the Knoxville-based carrier has participated in three major community events all with an eye towards fostering positive sentiment towards the image of truck drivers and the trucking industry.

A recent survey found an increasingly positive outlook towards the industry and its most visible representatives – truck drivers –  by motorists nationwide and TLD staff and drivers continue to do their part to keep the needle moving.

In addition to public appearances, company officials have held benefit luncheons for disabled American veterans, local animal shelters and their own employees who have fallen into a rough patch. They have provided personnel and resources to national initiatives such as Habitat for Humanity and Wreaths Across America. They’ve even helped load and deliver truckloads of water during the Flint, Mich., water crisis.

“I think those things are very important in terms of building what we want the culture to be at TLD and a company that recognizes the importance of giving back,” president and COO Jim Peters said. “Our people recognize this is something we want to do. That’s kind of the culture we’re building. There’s always room for development, but based on the company being 10 years old I’m pretty proud of what I think we strive to achieve in that area.”

TLD Logistics, an independent subsidiary of Toyota Tsusho, has been recognized as one of the 20 Best Fleets to Drive For in North America four years running. Part of the selection process includes interviewing 20 percent of the driver fleet, so if the drivers aren’t saying good things about the overall company experience there’s not much chance for it to win.

TLD’s most recent community outreach involved a Touch-A-Truck promotion at a Tennessee Smokies baseball game and educational platforms at two nearby elementary schools – Transportation Day at Cedar Bluff Elementary and Career On Wheels at Bearden Elementary.

The Touch-A-Truck theme night featured a TLD truck, a truck and trailer combo and the company’s popular driver training simulator. TLD’s first-time participation in the event created interest among the nearly 3,000 on hand well past the first pitch of the ball game.

“When the kids see something like that, especially the TLD simulator, their eyes definitely light up,” Smokies marketing and community relations manager Connor Pearce said. “When they can go inside and experience something or touch something like that and see a truck up close and personal that’s pretty cool.”

At the Cedar Bluff visit, the student body, several of whom have truck drivers in the family, got to tour the inside of the only OTR truck on site. At Bearden, nearly 350 K-5 students got to see Tony Gossett’s military-themed wrapped TLD tractor, thoroughly enjoyed the sound of the truck’s air horn, and eagerly asked questions of the 10-year Army veteran driver.

“One of (the students) said, ‘This is the coolest truck out here,’” TLD marketing coordinator Tristiny Bell said of the Bearden visit, which included vehicles from a half-dozen trucking companies. “I think it gave them a pretty cool look on what all (drivers) do day-to-day, asking those questions they probably didn’t think they’d ever be able to ask. It creates an open line of communication, that they’re regular people, they’re not big and scary, they really could be your dad or your grandpa or even your auntie or grandma.”

It was the first time a semi had been to Bearden’s Career on Wheels Day and principal Susan Dunlap was appreciative of the opportunity to introduce her students to another career option.

“They assume all of that gets done but they really don’t link a job to that or that people are employed to do those kinds of jobs for the trucking industry,” Dunlap said. “They have no idea of everything that’s transported across the country and how much those people contribute to our society.

“It’s introduced them to another possibility for a career as they get to a point where they’re actually considering what they want to do. As they talked with (Gossett) hopefully this introduced them to what’s required and the scope of possibilities of what he can do in that big truck and how it impacts them at home. It gives them another opportunity to see what’s out there.”

That’s the positive reaction TLD officials hope to draw from the community through its nearly dozen outreach initiatives each year. Peters personally participates in more than half of those events and said “it’s a lot of fun.”

“It’s always surprising to me about the amount of technology that is involved with running a truck that, quite frankly, particularly the kids are always impressed with,” Peters said. “They think it’s just a truck, steering wheel and that’s it. Then they get in there and see we have the electronic logs in the truck so the truck is tracked, drivers are entering their activity into a computer all day long, have internet access when they go to the truck stop so they’re able to get on line and basically keep in communication with their family, when people see that they’re amazed about the amount of technology that’s involved in trucking.”

And without the opportunity to get up close and personal with a local trucking company like TLD Logistics they would have never known. 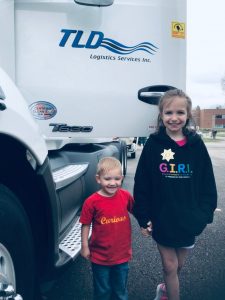 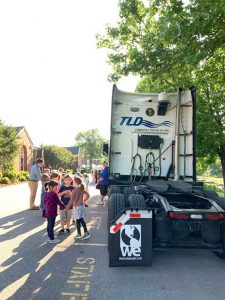 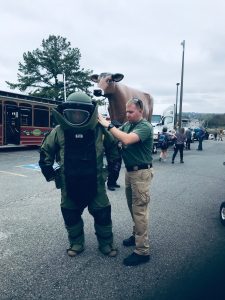 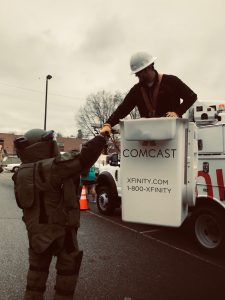